Log on to Fonbet and well let’s just say you will be underwhelmed. Uninspiring to say the least. In fact if you stumbled on to the site you would be forgiven for not knowing it was even a betting site. Fonbet started their bookmaking business in 1994 after the collapse of the Soviet Union.
There online offering came about a few years later and it looks as if it hasn’t changed since. Read most Fonbet reviews however and they get a reasonably rating. Even though they had trouble with the authorities in Russia they are still going strong. The landing page for the site is in Russian and it takes a bit of looking for the translator tab the flags are very small in the header.
English is the only other language platform catered for. The tabs in the header will take you to a choice of betting options. Sports betting is strangely titled ‘Bets’ then you have Live, Tote, TV games, Virtual, Casino, Racing and Financial. This is a Fonbet sports book review so we will be concentrating on that aspect but it must be said that covering so many areas is a strong commitment.

So you log onto fonbet sports page and straight away it starts to look more like a bookies. Functional and nothing flashy about it at all. It’s as Russian as it can be. Sing up is easy some personal details and away you go. That is of course if you don’t live in one of the many restricted countries. The legality in Russia is a best confusing but you have to assume its ok there as the company has many shops still operating. But it is a little unclear.
If you are used to getting a welcome bonus you will be out of luck. Fonbet don’t offer a free cup of coffee let alone a welcome bonus. So let’s get onto what they do offer. A dozen sports are covered on the ‘Bets’ page and of course football is paramount. Just about every league you can think of has available betting opportunities. But the amount of markets on offer is terrible, the odds are not bad but come on less than half a dozen markets what’s that all about? Then we have the horse racing. Which in fairness is a rarity for most online books.
The race card is actually quite a good coverage of UK meetings and there’s the dogs too. The odds are what you would expect but the look of the card is bleak. It’s as warm and friendly as a Russian winter. But it works and people use it a lot. But there’s not so much choice in that neck of the woods so you know beggars can’t be? 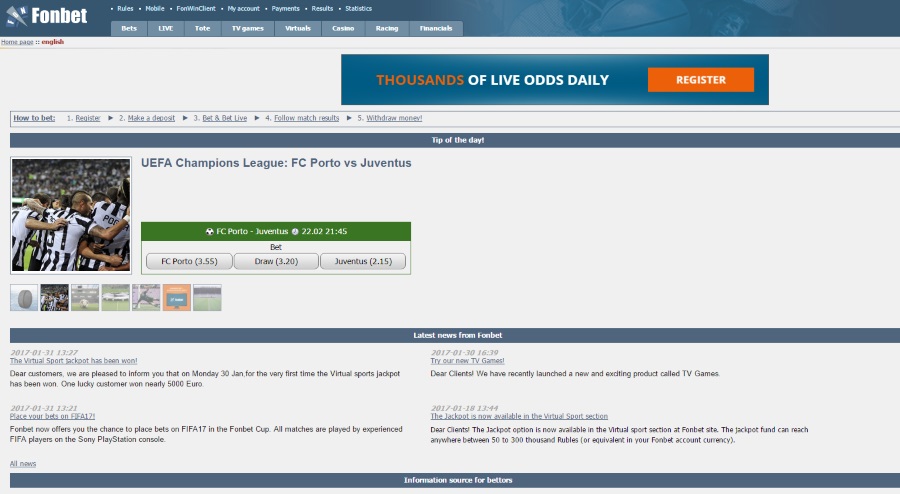 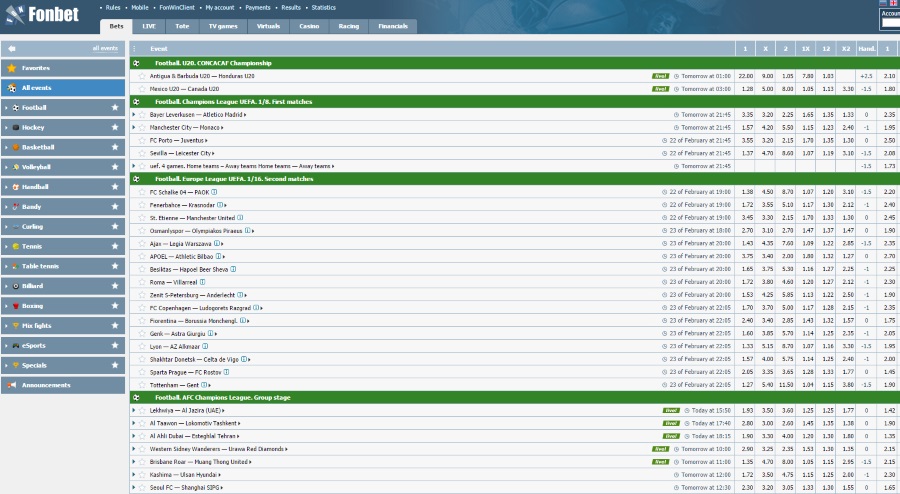 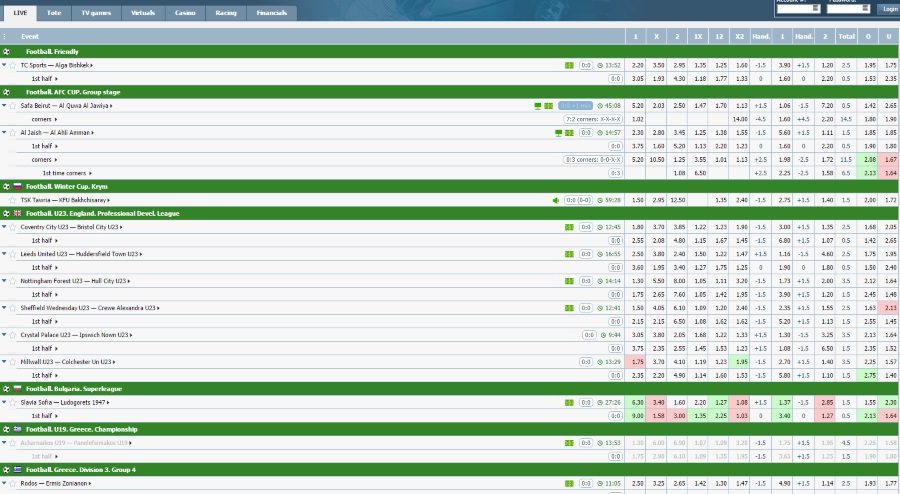 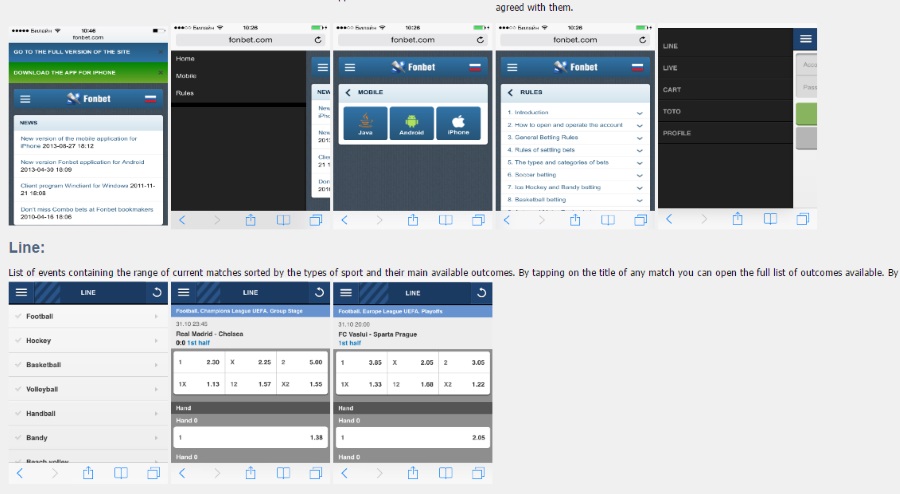 Fonbet Mobile App For Everyone

Fonbet mobile app comes in all flavours. Android, iOS and a new Java version for the odd ones out. The app has a few nice functions like the top 5 bets that are currently being made. There is also a results section. If that’s not your thing then the mobile site happens to be ok from your browser. The irony is as with a look of online bookies the mobile site looks far better on a smaller screen. It works too. Most of the payment methods can be used via the app and as Russian bookies go there is a good choice.
To save yourself unnecessary grief use the same withdrawal method as you did depositing. There is a whole list of rules surrounding banking that should be read carefully. There are no fees charged for most methods and you can make 6 withdraws in a day. Fonbet are known for a fast turnaround if you have no issues that is. Accounts can be made in USD/RUB/EUR.

They have been around the block for sure. All of the usual forum posts of don’t trust them they are Russian bookies blah blah. The fact is they have been around over twenty years in a country not known for tolerance. But even if they have friends in high places at home that doesn’t help them online. Yes they have got some horrendous posts written about them. They have been in trouble with the authorities back home. This is not a glowing report but they have lots of loyal customers.
There are just as many if not more favorable reviews and forum comments about them as there are bad. Purely from a standpoint of what they offer they are not top draw. The football markets are pitiful. But if they are the only choice you have well the decision is of course yours.

Having a license in Curacao has as much validity as a chocolate fireguard. The authorities there don’t even take care of most of the paperwork they farm it out and sub-licenses are issued. The government there has admitted that the whole thing is not transparent and has a bad reputation. No kidding! They have had their fair share of political upheaval lately. So when they say that they will look into it you have to cut them some slack. But only so much.
As punters we deserve to have strong regulatory bodies in place. No more sham jurisdictions. There are too many shoddy practices going on and it must change. That said there is no real evidence that Fonbet commit any offense just hearsay in forums. But if a bookie can have a license with a jurisdiction that doesn’t even have a complaints department or even procedure how will you ever know? As far as Russians go Fonbet is the second coming. As for the rest of Europe well most outside of Eastern Europe don’t bother. There are far better bookies out there.
If you don’t have access to those bookies then the common consensus is Fonbet is one of the best you can get an account with.